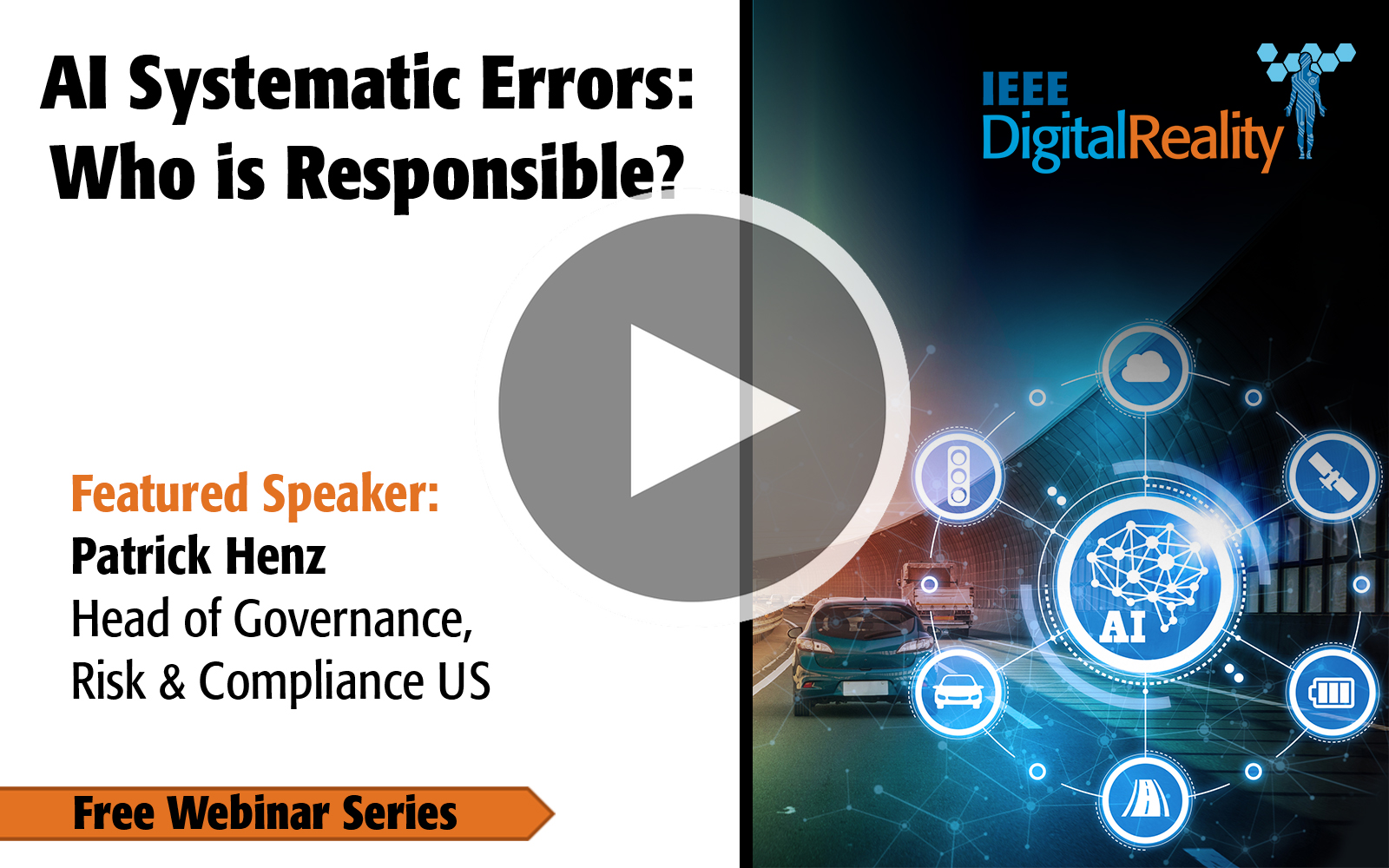 AI Systematic Errors - Who Is Responsible?

In contrast to humans, all decisions made by algorithms are systematic and based on user data, sensors, and algorithms. The question is, who is responsible for errors: the provider, the integrator, or the end-user? In most scenarios, responsibility is distributed amongst all stakeholders. Full autonomic systems (including self-driving technology) are not accepted by lawmakers, and a human supervisor is demanded as a backup.

Thanks to behavioral science, research knows that humans can be influenced and manipulated by Artificial Intelligence. This is comparable to the animal kingdom in which an alpha rules the pack, but the beta is able to manipulate the alpha. Accountability from all sides (including creators, integrators, and users) is required to reduce systematic errors and the related effects on humans, such as falling to biases (like the over-trust of Artificial Intelligence and status pressure), leading to mission and commission error.

System-thinking, as described by W. Edwards Deming in his “System of Profound Knowledge,” can exemplify the direction – AI decision-making must be transparent, audited, and understood by humans. Even more, humans need to be aware that responsibility stays with them. This means they not only have to accept accountability for decisions but must also directly create AI-based on Deming’s philosophy. For everything else, Deming concluded that “a bad system will beat a good person every time.” An increasing number of government officials are demanding the inclusion of behavioral science into acceptable corporate behavior. This can result in a greater moral responsibility amongst creators and providers of AI for their technology, in addition to a legal and sanctionable influence. 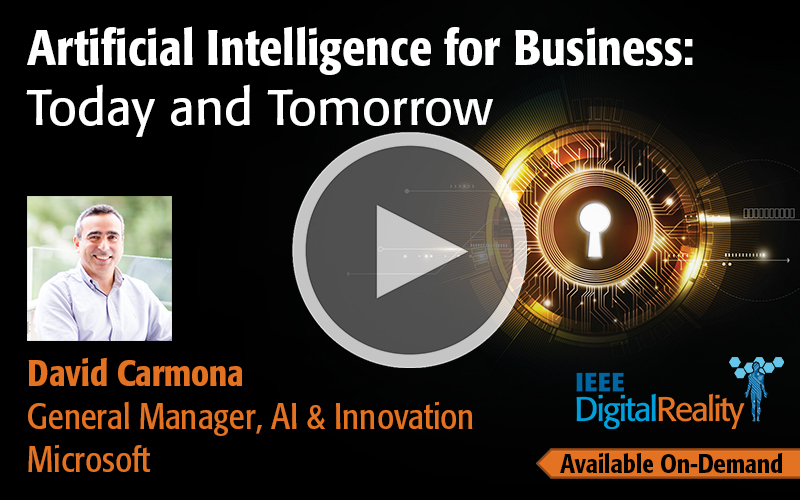 Just like every company is now a software company, every business will soon become an Artificial Intelligent (AI) business. In this talk, David Carmona, Microsoft’s General Manager for AI and Innovation, discussed the key technological trends that will fuel that revolution, including massive AI models trained on supercomputers, autonomous systems that learn with humans, augmented intelligence, and responsible AI. 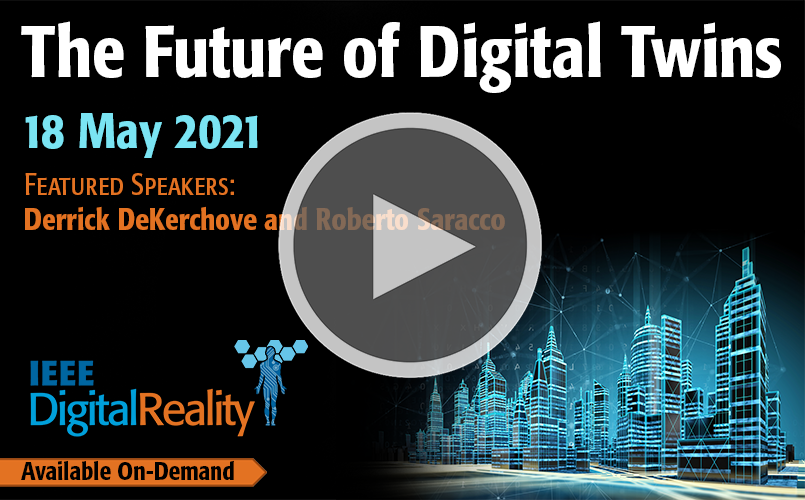 The Future of Digital Twins

Digital Twins were defined approximately 15 years ago, and it took them about 7 years to become adopted by the manufacturing industry, first by General Electric and then several others. However, in the last five years, they have been applied in an increasing number of sectors, from building construction to healthcare, and they have evolved significantly from the original idea of being a digital mirror of an object.

Now, their evolution is accelerating both in terms of application and capabilities, extending their coverage to mirror people (from deep twins to cognitive twins). In addition, they are continuously acquiring an increasing amount of intelligence, all aspects of which are being addressed by the IEEE Digital Reality Initiative.

In this decade, we are expecting to reach a point where everything, including each of us, will be flanked by its own digital twin. The European Union has recently committed funding to create a digital twin of our planet: Destination Earth.

As they evolve, and particularly as they enter into our lives, new challenges are created by technology. Challenges that are rooted in our social lives and in our culture are coming to the forefront.

In this webinar, the speakers shared views on the ongoing Digital Twin evolution, as well as address the societal and personal issues that are emerging.

The next generation of run-time risk models will act as digital Twins to anticipate threats and enable novel paradigms, like proactive dependability and collaborative security, as support to prognostics and preventive maintenance in Industry 4.0 and other smart-X applications (e.g.,smart-houses, smart-cities, smart-transportation, etc.).

The concept of risk is a combination of threat probabilities, vulnerabilities, and expected consequences. In traditional risk modeling and evaluation, during the design phase, analyses are performed and may be repeated periodically or at relevant system changes. With such approaches, there is no possibility to evaluate how the risk evolves over time as a condition of actual system state and detected threats. One challenging objective, in the field of connected cyber-physical systems (CPS) and the Internet of Things (IoT), is to improve resilience by providing non-trivial mechanisms for run-time threat detection, risk estimation, and system reconfiguration following Self-X principles like self-diagnostics and self-healing. Threats include faults, errors, and failures, and can be either intentional (e.g. security attacks) or unintentional (e.g. random faults).

Models used in static risk assessment during the design phase can be reused and integrated into appropriate frameworks. This will allow online monitoring of relevant system parameters, threat detection, and dynamic adaptation to respond to threats. In critical applications, the reuse of suitable models already employed for system certification together with run-time model-checking supports explainable Artificial Intelligence (XAI) that is required in order to build a trustworthy autonomous CPS, such as a self-driving vehicle.

A Glance at Megatrends: Demographics, Climate change, and Urbanization

This webinar described three megatrends, the related windows of opportunity (when available), and exemplified their countertrends.

The human population continues to grow at a rapid pace, and naturally, resources will be diminished, environmental pollution will increase, and the use of technologies will transform. By recognizing patterns, researchers can identify a series of changes that have been in progress for many years, typically for decades. These changes are known as Megatrends and are likely to have effects well into the future.
Megatrends have to do with major transformations that influence many other changes, profoundly altering social forms and mechanisms, and affecting diverse economic sectors. They are so deeply ingrained in the functioning of modern societies that it is almost impossible to change a megatrend unless there are exceptional circumstances (windows of opportunity). Moreover, they are often accompanied by secondary trends that move in the opposite direction. 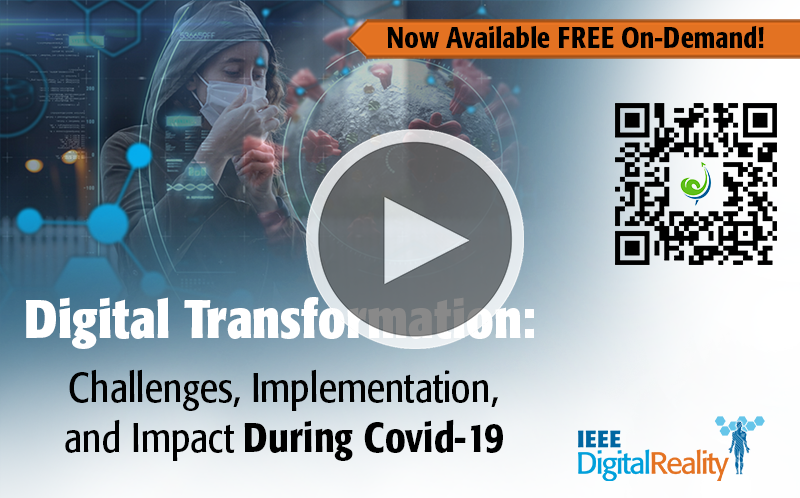 This webinar focused on Digital Transformation and, in particular, discussed the challenges pertaining to the process and pace of implementation, as well as the impact on the local culture. Subject-matter-expert, Roberto Saracco, discussed the acceleration of the Digital Transformation throughout the COVID-19 pandemic, and shared important and relevant findings extracted from an IEEE Digital Reality whitepaper. written by several of the IEEE Future Directions committee members.

This whitepaper is focused on multiple aspects relating to Digital Transformation and covers the continuously evolving technologies, and how they can and may continue to be used in the future. 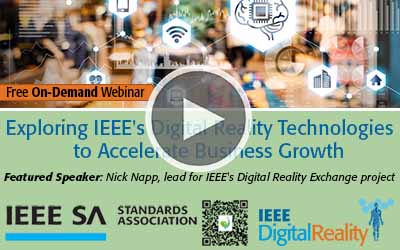 In this webinar, Nicholas Napp, the project lead for IEEE's Digital Reality Exchange project, dives into the challenges presented by digital reality projects from the perspective of both project owners, and other stakeholders, such as vendors and consultants. Learn more about how IEEE's Digital Reality Exchange can help overcome those challenges and be instrumental in driving digital transformation within the enterprise. 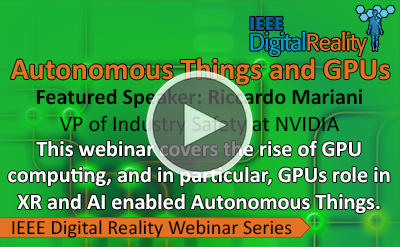 In addition, GPUs are used for the creation of next-generation augmented reality (AR) interfaces, with information pertaining to points of interest, alerts, navigation, and co-pilot support for drivers.

This webinar will provide an overview of the fundamental characteristics of GPUs required to support new functionalities, including architecture, design, and verification points of view. It will also describe how dependability and functional safety need to be considered in order to provide the required level of trust for GPU computing. 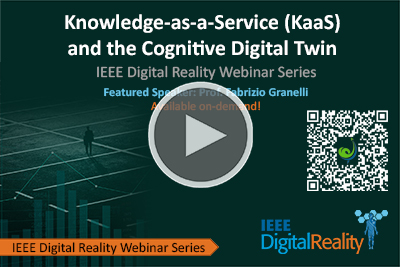 Knowledge-as-a-Service (KaaS) is a computing service that delivers knowledge to users, as opposed to data or information. KaaS enables technologists and engineers to make knowledge live and evolving on the web by allowing users to learn directly from elaborated knowledge, for example, in the form of knowledge graphs.

By merging KaaS with Artificial Intelligence, it is then possible to define the concept of a Cognitive Digital Twin. A complete cognitive digital twin will act similarly to AI that can make its own decisions, process thoughts, and execute actions, just like a real, functioning organism. 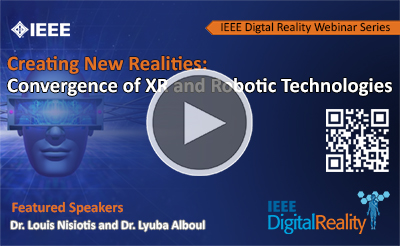 The recent advancements in technology and the exponential increase in the use of interconnected devices have drawn significant interest and influenced the development of complex computing systems. Working with the emerging digital technologies of Virtual (VR), Augmented (AR), Mixed Reality (MR), Digital Twins, and Robots has never been more exciting than today. Especially when these technologies are fused together in innovative ways to allow the development of a new amalgamated reality and provide opportunities that may radically change the way we interact with real and artificial agents, our surroundings, and with each other.

This webinar presents a new type of Cyber-Physical-Social Eco-Society (CPSeS) system that implements the idea of ‘technological fusion’ by bringing together Mixed Realities, Robots, and Social Networking to provide engaging and interactive new `realities’. This CPSeS goes beyond current virtual environments experiences by encompassing both physical and virtual spaces using cutting edge robotics technology for actuating, sensing, processing, and guiding purposes, immersive technologies for visualization, and integrating social inputs between users in the real and virtual worlds, creating a disruptive new paradigm that can contribute to the digital transformation of a wide range of domains. 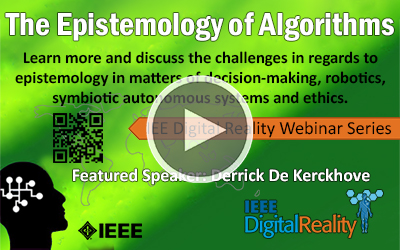 The Epistemology of Algorithms

All human communications, not to mention those of all primates, most vertebrates, and even insects have been mediated by the production of meaning, from mere utterances to the most evolved media. Algorithms produce meaning too, but they achieve it through a process that doesn’t require an understanding (e.g. Google Translate needs no background information and doesn't always make sense). Hence, humans are unable to influence systematically produced algorithms. This fact may present a challenge to epistemology in matters of decision-making, robotics, symbiotic autonomous systems, and ethics.

Are you knowledgeable about previous pandemics that affected the world? How much of that info do you take into consideration in situations relevant to Covid-19? Learn more about this and the challenges regarding epistemology in matters of decision-making, robotics, symbiotic autonomous systems, and ethics. 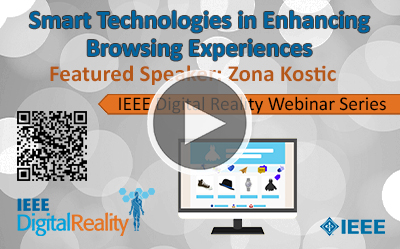 This talk focuses on systems that aim (or could be used) to bridge the gap between physical and digital arenas, using digital data associated with physically situated objects, and transforming and visualizing this data in relation to a given context. Using portable devices or digital realities headsets, applications generate the object-related data visualizations for further exploration. With such systems and its interplay between real and digital realms, new avenues could be opened for creating in-situ immersive visual experiences. 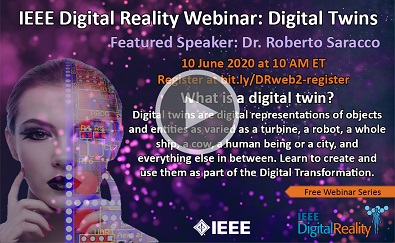 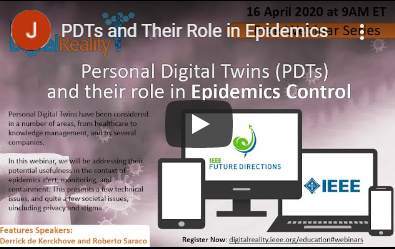 Personal Digital Twins and their role in Epidemics Control

Click here to see more information about the upcoming webinars.