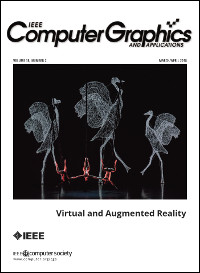 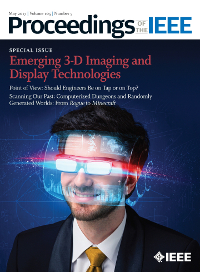 Proceedings of the IEEE, May 2017, Emerging 3-D Imaging
and Display Technologies 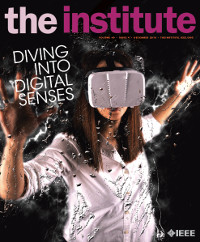 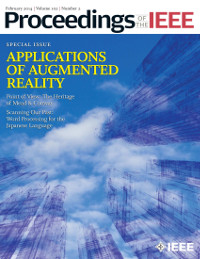 Proceedings of the IEEE, February 2014, Applications
of Augmented Reality 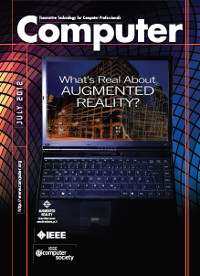 Since the shift from nomadic life, to aggregation in clusters or cities, humanity has faced epidemics. It is the cluster of people that provides the fertile environment for viruses to jump from one host to the next, generating an epidemic. The geographical distance among clusters is a barrier to the spread of the epidemics; traveling from one locale to another was the only way to continue the spread. In the past, the epidemics spread along the commerce, maritime, and land pathways. Travel was slow and sporadic so an epidemic took years to become a pandemic.

Today we have both bigger clusters (megacities and cities that on average are much bigger than the ones of the past) and much faster and denser traffic among clusters. This fuels both epidemics and pandemics.

Healthcare costs are on the rise, and this is causing an increased interest in automation. However, it should be noted that in a few health care areas automation is sought to deliver better quality, like in pharmaceuticals or assistive automation in surgery which enables procedures that go beyond human abilities (micro surgeries among others). In surgery, there is a growing digital transformation, with diagnostic procedures generating data that are analyzed automatically, creating a model that is used for simulating procedures and eventually used by autonomous or semi-autonomous systems in surgery.

The Digital Transformation is made possible by technology advances and is steered by economic and societal factors. It is a whole system transformation that requires the availability of a tremendously complex infrastructure, similar to how the atoms economy has evolved over centuries by creating in parallel tremendously complex and intertwined infrastructures. Logistics value chains have become extremely effective and extremely complex. Computers have boosted their efficiencies and made possible the creation and management of even more complex infrastructures. These computers supporting infrastructures are slowly morphing into infrastructures of their own. The large data centers that are supporting shipping of parcels and containers are now managing the shipping of bits in a structured way (e.g. by adopting blockchain).

These infrastructures, or platforms, have been around for quite some time and exist independently of the Digital Transformation. However, this latter has created an economic environment where platforms become a fundamental component. This whitepaper presents a synthesis of discussions with key industry players regarding platforms in this age of Digital Transformation. 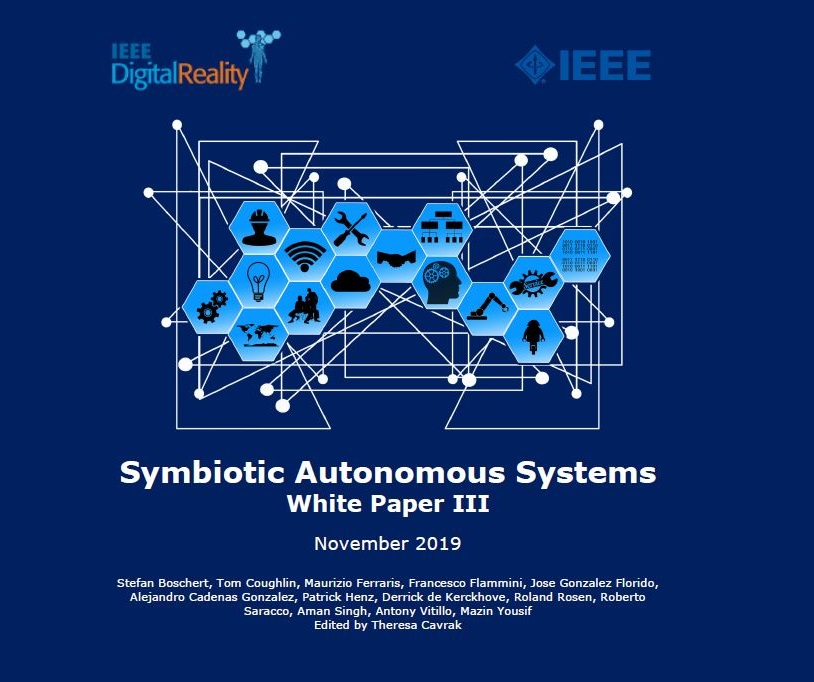 This document represents the third white paper produced by the IEEE Symbiotic Autonomous Systems (SAS) Initiative that in 2019 merged with the IEEE Digital Reality Initiative to further foster the Digital Transformation and continue the work of the first two years of the SAS Initiative. This third white paper focuses on today’s application of (Symbiotic) Autonomous Systems, the industrial application research, and the feedback coming from leading edge products, since these are the stepping stones to foster the evolution. Notice that at this time, and considering the observation time frame of this white paper, the focus is on Autonomous Systems. Symbioses will not materialize in the coming two years, at least in a significant way from the point of view of implants and more generally of symbiotic technologies. However, symbioses at a societal level is already here (for example, we are in a symbiotic relation with our smartphones) and is addressed. The target audience of this third White Paper includes professionals, industry leaders, public institutions, and government decision makers on whom lies the responsibility of investing resources and delivering to the market, affecting the society and wellbeing of citizens as well as creating business wealth.

It is clearly impossible to keep up with the advance of knowledge. A novel Leonardo da Vinci is no longer possible given the breadth and depth of knowledge built in these last centuries and particularly in these last decades. Connectivity and digital processing (that used to comprise storage and access but now is evolving into analysis, correlation, and creation) have created, paradoxically, a sort of black hole of knowledge. We know that there is a huge wealth of knowledge potentially available, but in practice it remains beyond reach to the single person and more to the individual company.

And it is getting worse. In several (technical and scientific) areas, the knowledge gap is widening, and in spite of the abundance of good and accessible courses, staying up to date has become impossible. Even obtaining a general awareness of what knowledge is available is challenging. 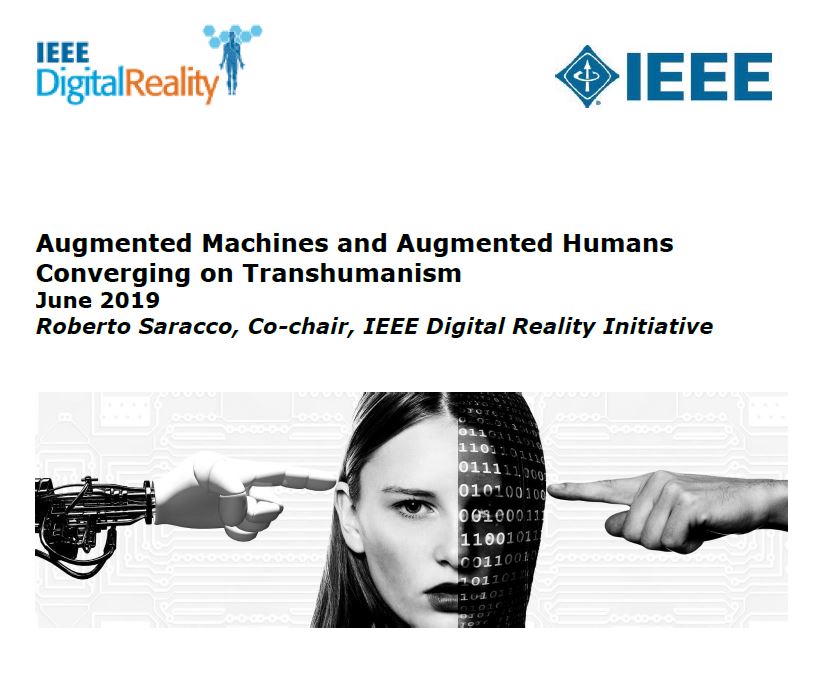 We have experienced a significant evolution in the capabilities of machines over the last 250 years with an incredible acceleration in the last 50 years, thanks to electronics and software. This evolution is going to continue and accelerate in the coming two decades leading to machines as "smart" as humans.

At the same time the human species has augmented its capability in various areas more than doubling life expectation over the last 100 years, and individuals have learned to leverage machines as never before to improve their life, their performances and extend their knowledge. This is also expected to progress in the coming two decades to the point that the boundary between humans and machines will become, in many instances, fuzzier and fuzzier, partly due to the growing use of digital twins. The progress seen in the last decades and the one expected is reshaping the idea of transhumanism, making it much more concrete. 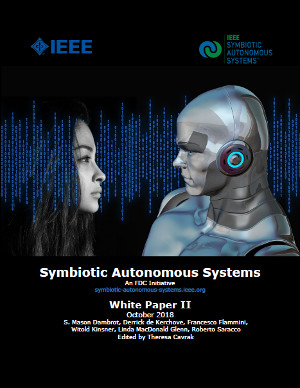 This White Paper follows the first one produced in 2017 by the IEEE Symbiotic Autonomous Systems Initiative (SAS), extending it to address updated technologies and cover additional topics due to the evolution of science and technology. Additional white papers will follow because this is an area in continuous development.

The first examples of symbioses are already available in a number of areas and even now, these are impacting our economic system and way of life. The IEEE SAS Initiative takes a 360° view based on technology and standardization—the foundation of IEEE—and invites all interested constituencies to contribute complementary points of view, including economic, regulatory, and sociocultural perspectives. The transformation fostered by technology evolution in all paths of life requires planning and education by current and future players. Another goal of the initiative is to consider the future of education, given that these symbioses transform its meaning, making it both shared and distributed.

In this respect, the aims of this White Paper are to further develop the ideas presented in the first white paper: (1) to highlight impacts that are clearly identifiable today, and (2) to indicate emerging issues, thus providing a starting point to those involved in making public policy to understand the technical fundamentals, their evolution and their potential implications.

Note that this White Paper is intended to be self-contained, without requiring the reader to read the previous white paper.

This White Paper is the result of a joint effort by several people and represents a consensus reached among the members of the IEEE Symbiotic Autonomous Systems (SAS) Initiative at the end of October 2017. Since the SAS field is in continuous evolution, this White Paper should be considered a “work in progress.”

SAS leverages many technologies and has applications in many vertical markets. The field will therefore have an increasing impact on our society—and on the way, each one of us perceives and relates to his or her environment. Hence, the issues related to Symbiotic Autonomous Systems go far beyond just technology evolution and utilization.

In this respect, the aims of this White Paper are to (1) highlight those issues that are clearly identifiable today, and (2) to indicate emerging issues, thus providing a starting point to those involved in making public policy to understand the technical fundamentals, their evolution and their potential implications.

In our first IEEE Talks Digital Reality Q&A session, we spoke with Raj Tiwari, lead co-chair of the IEEE Digital Reality Initiative. Raj provided his insights on Extended Reality (XR) and its potential for changing how we live, work, learn and share, providing information on use cases for the technology and highlighting its importance for both enterprises and individuals as we move into a new transformational era.

These eBooks collect posts each year that have been published since 2016 on the FDC blog touching upon the broad area of symbiotic autonomous systems from technology enablers evolution to personal and social impacts.

"Gianluca Bacchiega shortly defined in 2017: “A digital twin is a real time digital replica of a physical device.” To be more specific, the IEEE’s work-group for Symbiotic Autonomous Systems defined in its second white paper: “a Digital Twin is a digital representation of any characteristics of a real entity, including human beings. The characteristics represented by a Digital Twin are a subset of the overall characteristics of a real entity. The choice of which characteristics are digitalized depends on the purpose of the digitalization, i.e., the intended use of the Digital Twin.” Based on this definition, the virtual model is not limited to being the second (replica), but instead understands it as a digital mirror of a physical object (including a living organism) or process."

The IEEE SAS Workshop in San Diego was run in conjunction with TTM 2018, a fitting association since the horizon on the initiative is long term 2040-2050. As it was pointed out in the opening introduction by Roberto Saracco, the Initiative chair, the implications are being felt today and steps need to be taken today to prepare for a future that we like. It was pointed out that the evolution towards Symbiotic Autonomous Systems is "almost" inevitable. It will be the end result of the concurrent evolution of machine augmentation and human augmentation converging on a symbioses.

This project permits a large group of companies and other organizations that have not taken into account the rise of mobile AR in their planning process to explore how they might contribute to and adjust their strategies in order to excel in a just and healthy future wherein everyone will be able to acquire (capture), publish, and receive/combine digital assets in real time and synchronized with their physical world surroundings.

The Augmented Reality and Standards white paper provides a brief overview of the opportunities for AR expansion in various areas. It also highlights the challenges faced in the AR market and how standardization can help through interoperability, improving efficiencies, and driving market adoption.